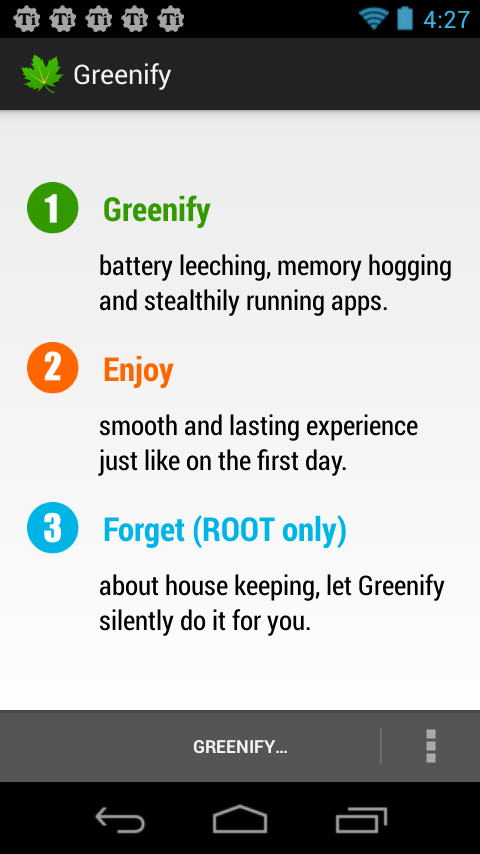 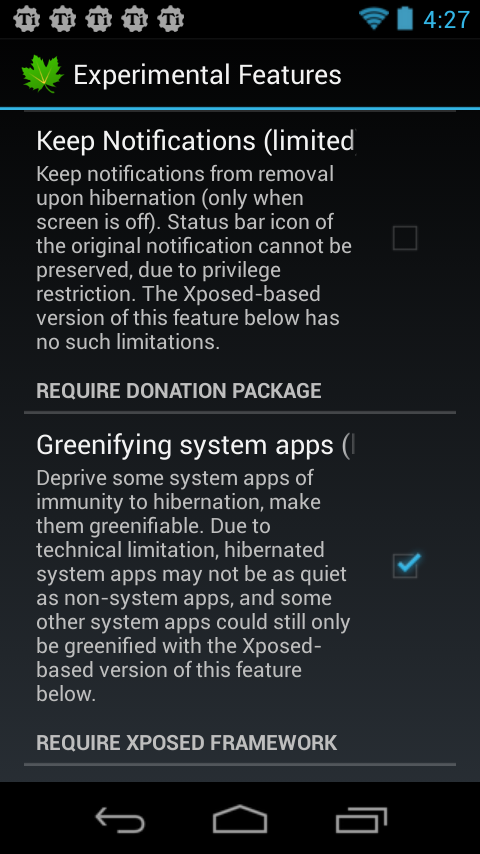 
With Greenify, your device can run almost as smoothly and lastingly as it did the first day you had it!

Featured as Lifehacker's Top 1 Utility in 2013 Best Android Apps (http://goo.gl/1VMwnE), Android Authority's Top 3 Best Root Apps (http://goo.gl/g0L0qZ).
Greenify help you identify and put the misbehaving apps into hibernation when you are not using them, to stop them from lagging your device and leeching the battery, in an unique way! They can do nothing without explicit launch by you or other apps, while still preserving full functionality when running in foreground, similar to iOS apps!
NEW: Non-root working mode is now supported in 2.0, but still in early stage. It currently lacks auto-hibernation due to privilege restriction. Use "Hibernate All" shortcut (widget) for convenience in non-root mode.

IMPORTANT: Greenifying an app implies that you are aware that all the background functionality (service, periodic task, event receiver, alarm, widget update, push message) of this app will become out of service during the hibernation except when you are using this app.
NEVER greenify alarm clock apps, instant messaging apps unless you don't rely on them. Please do verify the impact of greenified apps on which you heavily rely.
Compared to other popular tools aimed for the similar purpose, Greenify offers the following advantages:
◆ Unlike the "Freeze" feature in "TitaniumBackup Pro" that totally disable the app, you can still use your app as usual, share content with it. No need to freeze & defrozen it.
◆ Unlike "App Quarantine", you can launch greenified apps in any way as usual. No more crafted app-launch widgets, no more manual disabling.
◆ Unlike "Autostarts", you can benefit from almost all of its advantages, without needing to deal with the complexity and risk of obscure app components, and never lose functionality when app is actively running.
◆ Unlike any "XXX Task Killer", your device will never fall into the cat-mouse-game of stealthy-running and aggressive killing, which unnecessarily consumes more battery juice.
Note: Greenify do need a background persistent "Cleaner" service to put the greenified apps back into hibernation when you are not actively using them. It is designed and implemented in extremely lightweight, with an average RAM footprint at 3M in total, and nearly zero CPU and battery consumption.
com.oasisfeng.greenify

=== PERMISSIONS ===
INTERNET: Needed by "Raise Your Voice" program to send back only small amount of anonymous statistics data, without privacy information. You can opt-out at any time.
READ SENSITIVE LOG: To analysis the wake up cause of greenified apps.
GET ACCOUNTS & WRITE SYNC SETTINGS: Control the account sync of apps if its sync task is too frequent.

=== FAQ ===
* Why not support Android 2.x?
* It seems that automatic hibernation is not working.
* Some of my greenified apps (e.g. Google Maps) seems not hibernating.
* I want to greenify system apps!
* De-greenified apps still got no push notification!
……

Greenifing system apps is working in this version!

This app has NO advertisements