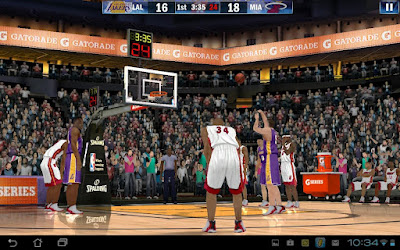 Features:
- Intuitive Controls: Choose between classic control and One-Finger control, built specifically for mobile devices.
- Improved graphics and animations.
- NBA’s Greatest Games: Relive some of the best performances in NBA history, including Kobe Bryant’s 81-point performance in 2006.
- A JAY Z Production: Featuring a soundtrack personally curated by multi-platinum recording artist JAY Z.
- Multiseason Mode: Play through multiple NBA seasons and establish your team as a dynasty.
- TV-style presentation, including full commentary from Kevin Harlan and Clark Kellogg.
- Updated Rosters - All transactions from the 2011-2012 season have been incorporated, meaning you will be playing with current teams and ratings.

Instructions:
1. Download the Apk game and install it.
2. Download the SD Data.
3. Put the folder extracted from .RAR in your phone folder "sdcard/Android/obb" (You must create "obb" folder if its not there)
(If you don't have SD Card, you can put it on "Internal Memory/Android/obb")

NOTE-
uninstall ADFREE if u are downloading from ur android phone..

Link will not load it knows I didn't pay?

No file for the SD card data.

there's no .rar file when i download it.just zip

@james..don't take tension.. just unzip the .zip file and Put the folder extracted from .zip in your phone folder "sdcard/Android/obb" (You must create "obb" folder if its not there)

Hi there..Ive download both apk and data file,but unable to install the apk file.it says 'there ia a problem parsing the package'..Any ideas?

@Darth...this is because apk is not downloaded correctly....download the apk again and install it...it will work..

Please place another link it doesn't work or is too slow

@Gautam...i just double checked both links and both are working with fast speed.

Is this running on samsung galaxy s2 ? Korean version and has android 4.0.3

@jerome...yes, it can be played on galaxy s2 korean version..

Hello does it works on samsung galaxy i-9000?

I just followed all the instruction but whe i play it says download or cancel?..

@Dennis...yes it works. Follow the instructions regarding sd data.

it doesn't work for me too.. it says download game or cancel.. I've put the extracted file in the obb folder but still it says to "Download the game or cancel"

@ramir...I think you are doing something wrong while copying sd data. If your phone has internal SD, then Place the obb folder in internal sd and not in external sd. It should work then..

@Sagittarian JiMz.. i dont have external sd.. so i put the data in my internal sd.. its location is Android/obb right? it still doesnt work..

@ramir...what are you copying in Inernal SD/Android/obb ??
Folder OR .obb file??

im copying the folder named "com.t2ksports.nba2k13android".. after i install the apk.. i copy it to SD/Android/obb.. then launch but it still says "download or cancel"

@ramir..If error continues then please try with external sd card. It should work.

after downloading both file which apk and sd. whre should i place it? in sdcard/android/obb? can i use torque w/ 4.0.4 android?

@Bdon...yes dear, you must place sd data to "sdcard/android/obb". It should work.

hi! tried to install it able to install but unable to download data ( error: because you did not purchase ). is there a workaround for it?

can i use it with s3 mini? i tried to install it but unable to download data.

@sean...which phone you are using and androi version?

@ehjie...Yes, you can play it on galaxy s3 mini...download sd data from above links only(and not from game). and copy it to desired location..it shoul work.

yes i only copied .obb file but same issue occurs

@ehjie..you are doing something dear. I just tried it in my phone and its working.

what android version is required for this?

tnx sorry i just dont see it above hehe.

WOULD THIS WORK ON SAMSUNG GALAXY TAB 2 7.0?

I went to the sd file link but it said it wasnt supported in my country, So I went to kprixy.com and I didn't know where to go after that. I'm stuck at the kprixy.com homepage

I have downloaded the application both .apk and obb but still I am having a Ok or cancel the SD data could be found? Is there a work around for this one?

I also made a subfolder /files?

can I install obb files to sdcard/Android/obb even im not rooted?

how come I always end up to "download game or cancel"

what did I do wrong? what should I do?

@rayan...it only comes when you put the data at wrong place

I have download both apk and sd data but its doenst work and then I open but still download or cancel, and ''download failed you may not have purchase this app plzzz help me :( I'm following ur intruction but doenst work I extract.

is it playable from a jelly bean version phone?

@cedie... which phone you are using?

@Nhel...can't say. But i will upload new version in couple of days..

@Jay... Its slow because your phone doesn't have any GPU

Den i tried to externalsd/android/obb/com.t2ksports.nba2k13android/file/extracted file

Lenovo a706 has gpu adreno 203.pls reply.i dont know if i did something wrong.just like what ive said its slow and has black spots in the player.thanks

@Jay... Adreno 203 is very old gpu and not enough powerful to run this game smoothly.