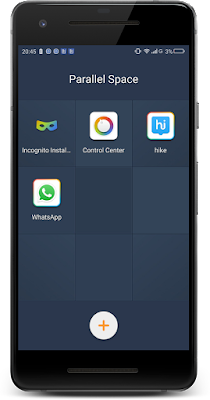 As one of the top-ranked tool on Android, Parallel Space helps more than 40 million users log in to their multi accounts at the same time on one device by cloning! It also protects user privacy by making apps invisible on device with the Incognito Installation feature. Moreover, users are able to customize their cloned apps in Parallel Space with themes to create their own stylish launcher. So far Parallel Space has supported 24 languages. Get Parallel Space now to manage your multi accounts on one device, protect privacy and create your customized space! com.lbe.parallel.intl com.lbe.parallel.intl.arm64

★Log in to multi accounts of social networking apps or game apps at the same time on one device
• Balance between users' life and work easily.
• Double users' online gaming experience and have more fun.
• Almost all apps are supported for a second account in Parallel Space. Data from both accounts won't interfere with each other.

★Switch fast between accounts with just one tap
• Run two accounts simultaneously and switch between them fast with one tap to effective manage different accounts.

What's New
1. Fixed the crashing issue of YouTube while adjusting the volume.
2. Optimized the overall performance of Parallel Space.
3. Fixed some known bugs.