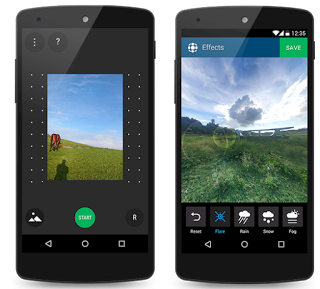 Now, with Panorama 360 , seamless panoramas can be easily created in seconds with a single tap. Just tap the Capture button and move your phone slowly and steadily from left to right. Once done capturing, the frames will be stitched into one awesome panorama automatically.
Panorama 360 lets you share quick n easy high resolution panoramas on Facebook, Twitter and Tumblr. Find out what the world is up to through our REALTIME panorama feed and share your exciting panoramas with other members.

We are similar to Photosphere but do not do the top and down part.

Convert your phone camera in a 360 Panorama tool. It's really easy-
- Tap your screen to start the process
- Move in the direction indicated by the pointer
- Tap again to stop
- Your panorama will get stitched and ready to share in less than 1 minute

To get the best panoramas, make sure there is enough light and keep your hands steady while capturing the frames

Follow us on Twitter @teliportme or leave us a few words at _http://www.teliportme.com/blog
For any queries, suggestions or feedback contact us via 360@teliportme.com and we will respond within minutes!!

Permissions required:
• ACCESS_FINE_LOCATION : We use this to find the location when you are sharing a panorama so that you can define the exact location.

This app has no advertisements